This question has been coming up a lot recently: What would happen to PA (Physician Assistant) & doctor salaries if the United States were to move towards a “Healthcare-for-all” sort of universal system similar to other westernized nations? I am not here to debate the merits of “socialized” medicine. In fact, I don’t even like using the term “socialized” as it adds a sort of stigma to the idea of healthcare that’s accessible to everyone. But one thing is clear – other countries with Universal healthcare tend to have lower costs, better care, and healthier patients.

What would happen to healthcare salaries, more specifically Physician Assistant salaries, if we were to adopt universal healthcare in the U.S.?

I Benefitted From & Experienced Socialized Medicine

For a brief period of my life, I used to live and work in France. I visited doctors in France. Half of my family lives in France. In fact, I write extensively about French stuff on my other site: FrenchCrazy.com.

There is a physician shortage in France. While my uncle is driving me around Paris, I heard reports on the radio which indicated such. The commenters lamented that foreign doctors, who wanted to live in France, would have to immigrate to fill in the gaps. They wondered why couldn’t France’s populace support France itself?

Family of mine are embedded in the French Healthcare system: one is a neurosurgeon in Dijon, two of them are anesthesiologists, one works as a military physician, one is a pharmacist, and the other two were training to become physicians.

I remember when I was visiting a relatives in Besançon, France. As an eager 1st year PA student, ready to start earning money, the AAPA salary report was just released. I pulled it up on my laptop

My relative was in French medical school, so she was curious. She looked at the report and remarked something along the lines of “wow, you guys are earning almost what we are over here.”

And it’s not like doctors in France are working less, have less expertise, or are less dedicated as U.S. doctors. They put their heart and soul into medicine.

Compare that compensation to U.S. physicians earning anywhere from ~ $250,000 for primary care up to $300,000 or $400,000 (and more) for specialists. This, of course, depends on things like your specialty, location, bonuses or even partial practice ownership.

While France does not currently have Physician Assistants, last I checked they just established an NP model (Infirmier en pratique avancée). So if Physicians are making a U.S. PA-C salary in France, I would assume that (imaginary) French PAs would earn less than physicians in the same area of expertise – likely in the $50,000 or $60,000 / year area.

French Physicians are not burdened and strapped with $200,000 or more of student loan debt compared to their American equivalents.

Education in France, including Medical education, is cheaper. First year students (in PACS) will pay 3,000 – 4,000 Euros to take a year of courses with the intent of entering a medical profession out of high school (you typically pay more if you’re in the Paris region). The first year of Medical school costs 1,500 euros (in the countryside) to about 2,200 Euros a year in Paris. These prices omit things like books and lodging, however student lodging is subsidized in France and likewise very affordable.

Tax rates in France are different than in the U.S, which is why I cited net (after-tax) numbers. French workers and employers have historically paid more in taxes in order to subsidize things like healthcare and low-cost education. I am not saying whether this is good or bad, I’m just pointing this out.

French Physicians do not necessarily benefit from the acclaimed 35-hour French work week. They do, however, get ample vacation time off from work.

French doctors also do not have to deal with a litigious work environment where lawyers are biting at the chops for the possibility of a huge payout and defensive medicine has become all too common.

It’s almost as if France and the United States have a completely different culture, history, and mindset when it comes to healthcare.

With a universal healthcare system, there would likely be some sort of drop in salary for Physicians and APPs (Advanced Practice Providers like Nurse Practitioners and PA’s).

But that is not to say that any changes would happen overnight. 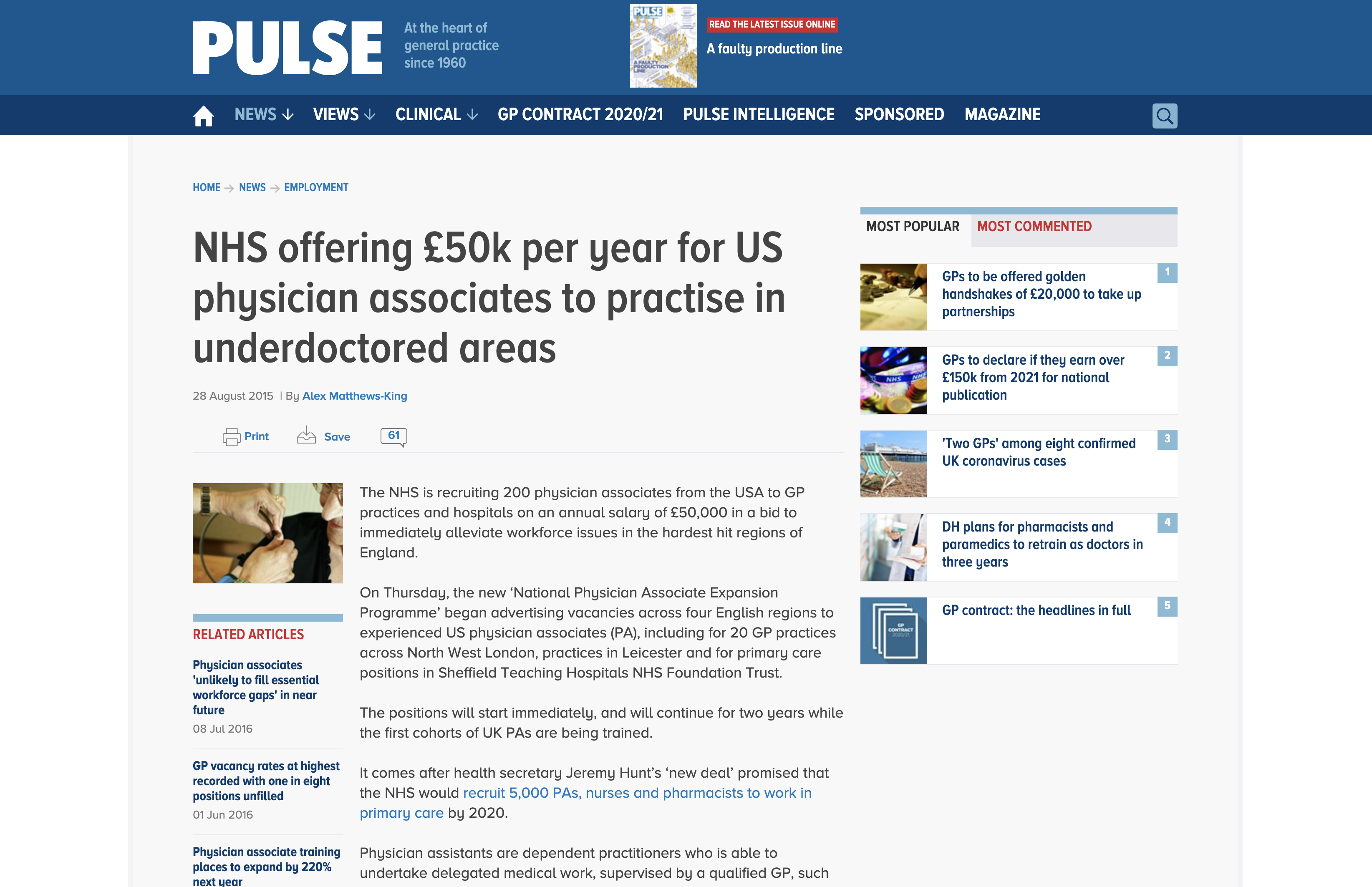 Look at the United Kingdom which has Physician “Associates” (PAs) and Nurse Practitioners who earn anywhere from 40 to 50 thousand pounds a year from NHS. Meanwhile, the doctors there are pulling 70 or 80 thousand pounds per year.

That’s not to say that a single payer system wouldn’t be able to support current salaries. I hear that provider compensation is a small portion of the total healthcare system’s costs.

But you would have to wonder if the current compensation would be sustainable for smaller practices all across America.

This is not an article discussing the advantages or disadvantages of changing the U.S. healthcare system. I merely wanted to answer the question about what would happen to healthcare provider salaries were we to adopt another model.

I believe (opinion) that a single-payer or universal healthcare system would negatively affect compensation of U.S. healthcare providers.

But who is to say that a full-on universal healthcare system would come to the U.S. or if some other sort of single-payer system would be enacted.

And despite my thoughts on our compensation, I remain open-minded to how we can improve and better U.S. healthcare to improve outcomes and provide more comprehensive healthcare to all.